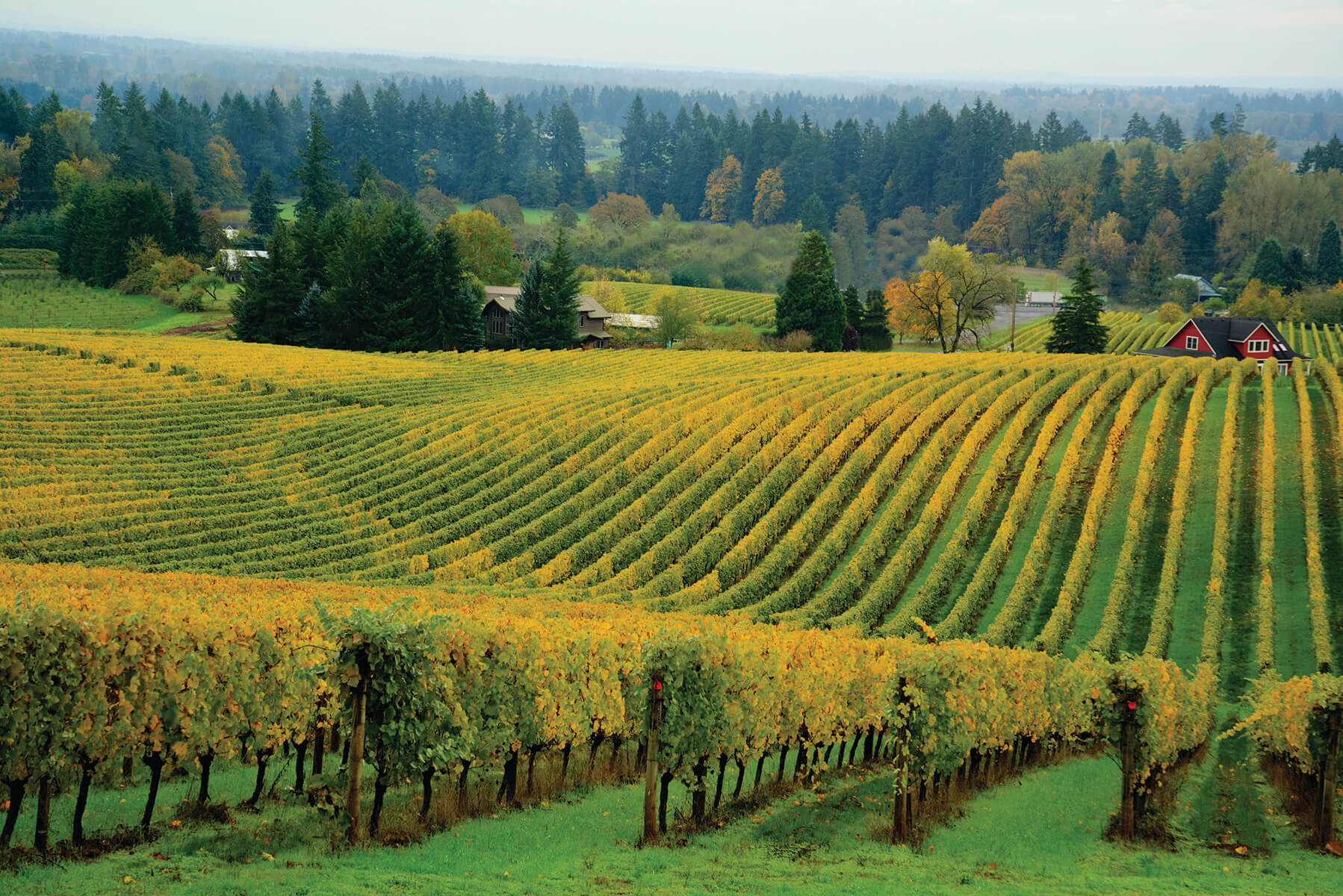 Recently, Charles Curtis, MW took us on a tour of Oregon wines to answer the question: Is Willamette America’s Cote d’Or? In Part I of our exploration, Charles shared the full producer and tasting notes from the wines he and our founder Greg Lambrecht tasted on our show, Wine O’Clock Live. In Part II, Charles takes us through the wine-producing areas in the state, and vintages to keep an eye on when looking to fill your wine collection.

There are four wine-producing areas in Oregon. Two wholly located within the state: the Willamette Valley and Southern Oregon. The Columbia Gorge and the Columbia Valley overlap with Washington State to the north and the Snake River AVA (American Viticultural Area) follows the river of the same name as it flows from Idaho into Oregon. Of the four regions, Willamette Valley, is the most economically important, accounting for 69% of the wine sold, while Southern Oregon accounts for 24%, and all other regions just 7% of the total. Seven subregions make up the Willamette Valley: Chehalem Mountains AVA, Dundee Hills AVA, Eola-Amity Hills AVA, McMinnville AVA, Van Duzer Corridor AVA, and the Yamhill-Carlton District AVA. The Ribbon Ridge AVA is yet another subregion, contained entirely within the Chehalem Mountains AVA. All of these areas are north of the town of Salem, and most vineyards enjoy east- and south-facing sites west of the river. Here is a brief overview of each of the regions:

Chehalem Mountains is among the oldest areas for winegrowing in the Willamette Valley and a reasonably large one, with vineyards spread over more than 100 square miles to the north and west of the town of Newberg. The Chehalem Mountains include some tall peaks, and are located close to the city of Portland.  All of the vineyards are above 200 feet in elevation. Because of the size of the appellation and the diversity of the soils, it can be hard to generalize these wines.

Ribbon Ridge AVA, created in 2005, is located entirely within Chehalem Mountains AVA. A single 3.5-mile-long ridge is home to all of the vineyards, ringed by hills on every side and thus warmer and drier than most of its neighboring wine regions. The soils are mostly Willakenzie, which is a fine-grained marine sediment that produces structured wines and gives a darker cast to the fruit.

Yamhill-Carlton is immediately miles southwest from Chehalem Mountains and closer to the Pacific Ocean, yet sheltered by the Coast Range to the west, the Chehalem Mountains to the north, and the Dundee Hills to the east all provide cover for Yamhill-Carlton, protecting it from rain. Soils are mostly coarse-grained, ancient marine sedimentary, which, like Ribbon Ridge, give firm and solid wines.

The Dundee Hills AVA is located between Yamhill-Carlton and the town of Newberg. This AVA is one contiguous area, defined by altitude, with all the vineyards being above 200 feet in elevation.  All have a consistent red volcanic (Jory) soils, which can produce wines of finesse and elegance with a brighter cast to the fruit.

McMinnville AVA is located just south of Yamhill-Carlton where the north and south forks of the Yamhill river meet near the town of McMinville. Because of its position within the Coast Range, it receives slightly less rain than the other regions.  The soils are mainly marine sedimentary deposits.  Both factors tend to produce wines with plenty of substance and length.

Eola-Amity Hills is south of the other regions, lying just north of the town of Salem. Afternoons here are cooled by Pacific breezes from the Van Duzer Corridor, giving wines with bright acidity.  Soils are mainly volcanic, since both the Eola Hills and the Amity Hills to the north were formed by volcanic activity.  Vineyards climb the hills to elevations of 700 feet.

The Van Duzer Corridor is the most recent AVA created in Oregon in 2019. This region lies in the lower hills to the west of Eola-Amity Hills.  It is the coolest region in the Willamette Valley and has mostly marine sedimentary soils.

2018 – Budbreak was early, and the growing season was warm, although cooler evening temperatures provided some relief.  The summer was drier than most, but temperatures fell in September and there was rain just before harvest that refreshed the grapes.

2017 – The year started cool and rainy, but turned hot and dry after flowering.  The conditions were difficult for the grapes, but rain at the end of the growing season helped bring in ripe fruit in healthy condition.

2016 – Another early vintage, from budbreak to flowering to harvest.  It was warm to very warm, producing ripe lush wines with full body and generous alcohol.  Less torrid than 2015 and 2014 but still very lush.

2015 – A hot year ripened the large crop to perfection (and beyond for some).  Results are full bodied, with plenty of alcohol and perhaps less freshness than one would hope for, particularly in the whites.

2014 – A hot year, with a large fruit set that still ripened fully, producing lush, dense wines, plenty of alcohol and fairly soft acidity, although the condition of the fruit was very clean, with none of the problems of 2013.

2013 – 2013 started out hot and dry and finished rainy and cool.  Fruit picked early did well, but the weather deteriorated sharply at the end of September.  Five inches of rain fell and temperatures turned sharply colder, provoking botrytis and slowing ripening.

Do you have a favorite Oregon AVA? Share with us on social what you’re drinking from the area by tagging @Coravin on all channels.