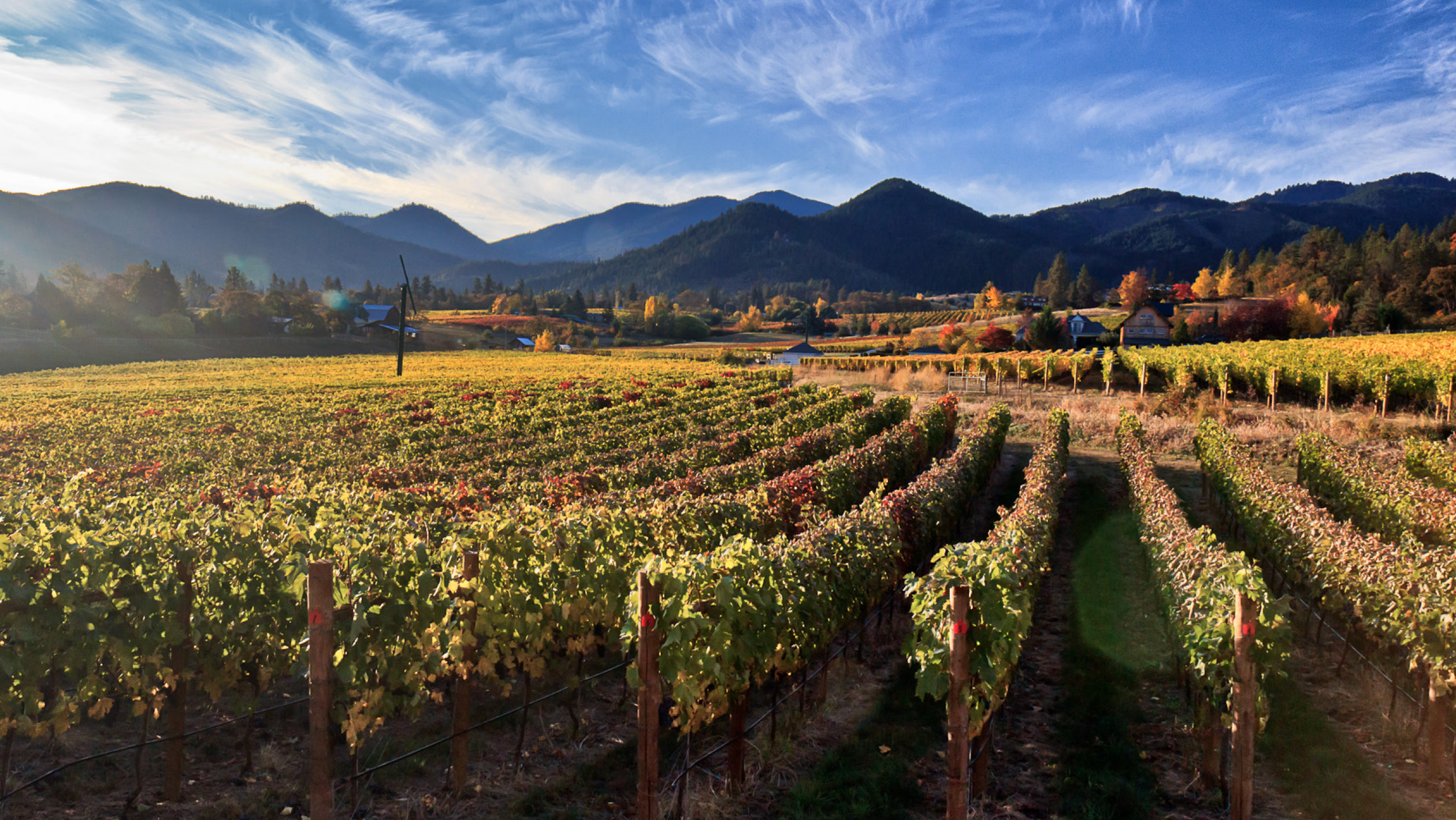 Last week Charles Curtis, MW took us on a tour of Oregon wines to answer the question: Is Willamette America’s Cote d’Or? Our founder Greg Lambrecht and Charles had a great time connecting as long-time friends and an even better time tasting amazing Oregon wines to get the answer. Keep reading for Part I of this series, where Charles shares the full producer and tasting notes from the wines tasted on the show.

Connecting on April 16th via Instagram Live with my dear friend Greg Lambrecht was an absolute blast! We have shared some wonderful bottles through the years. This time was certainly different being online, but still lots of fun. Below are a few specifics about the properties that we selected along with tasting notes.

Robert Drouhin purchased vineyard land in the Dundee Hills area in 1987 and sent his daughter Véronique to make the wines. The first vintage, 1988, was produced from purchased fruit. From these modest beginnings, this estate has developed into a beacon of elegance in American wine. They are today the proprietors of 124 acres, planted between 200 – 400 ft elevation and sustainably farmed and LIVE-certified. There are 113 acres of Pinot Noir and 11 acres of Chardonnay. The Pinot Noir is destemmed and cold-soaked before fermentation in stainless on native yeasts. Tannins are extracted by a combination of punching down and pumping over. Wines are racked into French casks, 20% new. David Millman is the director of the estate, and Arron Bell assists Véronique with the winemaking.

Superbly elegant—a marvelous argument for the congruence of Oregon and Burgundy.  There is a lovely lemony fruit on the attack with a floral edge and some very well-integrated aromas from aging in cask.  The wine is fresh and crisp but not thin, almost mineral. Lean and racy, there is a satisfying line straight through to the finish.  91 points, $33.00.

In 2012 Master Sommelier Larry Stone purchased the Janzen Farm, located in Eola-Amity Hills AVA near illustrious neighbors Domaine Serene and Evening Land, where Stone had been the manager until he left for a stint at Charlie Trotter’s in Chicago.  While at Evening Land, he worked closely with consulting winemaker Dominique Lafon, proprietor of the renowned Domaine des Comtes Lafon in Meursault.  Lafon would join Stone to form Lingua Franca in 2015 with Thomas Savre assisting Lafon in the cellars as he had at Evening Land.

Forward and engaging upfront, there is an attractive, bright passion fruit aroma with hints of butter and spice.  It is interesting to compare this with consulting winemaker Dominique Lafon’s Meursault as the overall power and balance are similar even if they are very different wines.  A luxurious style, but still very focused.  92 points $55.00.

Ken and Erica Pahlow founded Walter Scott Wines in 2008.  Ken’s background was working at the St. Innocent winery; his wife Erica was a sommelier.  The first few vintages were made at Patricia Green Cellars in Ribbon Ridge, and the next few were made at Evening Land, where Ken had the opportunity to work alongside Dominique Lafon and his team.  He has received support (and fruit) over the years from Evening Land’s proprietor, superstar sommelier Rajat Parr.  The Pahlows leased their property located in Eola-Amity Hills in 2012.  They source fruit from several vineyards, including the Arlyn Vineyard in Chehalem Mountains, The Dubay Vineyard in Eola-Amity Hills, Freedom Hill Vineyard in the Willamette Valley, and the Sequitur Vineyard on Ribbon Ridge.  The whites ferment in large casks, and all do their malolactic conversion; reds and whites alike are fermented on wild yeast.  The reds are aged in French barrels, 30 – 40% new.

There’s an admirable purity of fruit in the aromas of this wine that clearly say “cool climate” – greengage plums, lime peel, and apple, all with just a hint of oak from the cask ferment.  Acidity is crisp but not bracing, and there is a pleasant density that carries the flavors nicely until the end.  The finesse and balance almost recall a Dauvissat premier cru Chablis. 92 points, $40.00.

A to Z Wineworks

Deb and Bill Hatcher started A to Z Wineworks in 2002 with their friends and fellow Oregon wine professionals Sam Tannahill and Cheryl Francis.  In 2006 they brought in investors, purchased Rex Hill winery, and hired winemaker Michael Davies.  By 2012 A to Z was the largest winery in Oregon, producing wines sourced from throughout the state to critical and popular acclaim.

Chosen for value but appreciated for its drinkability.  The first impression is of straightforward aromas of ripe, almost baked plums and cinnamon, and a touch of smoke on the nose – the comfort food of wine.  From a hot vintage, this is rich and slightly soft, but not in an unpleasant way.  At this price, this should be hugely popular.  89 points, $15.00.

Cody Wright founded Purple Hands in 2005 at the age of 25.  By this time, he already had long experience in winemaking since his father is Ken Wright, who founded Panther Creek.  In 1994 Wright went on to found Ken Wright Cellars, with Cody working by his side.  Today Purple Hands works three estate vineyards and sources fruit from respected vineyards throughout the state, including Shea, Latchkey, Freedom Hill, and others.

More American than French in inspiration, this is dark, extracted, and concentrated, with a prominent influence from the cask aging.  Initially somewhat astringent, with time and a bit of air, it regains its elegance.  With time it may well smooth out. 89 points, $48.00.

Beaux Frères began in 1986 when Mike Etzel and his brother-in-law (“beau-frère”) Robert Parker Jr. purchased an 88-acre pig farm on Ribbon Ridge.  He began to plant the vineyard while working at local wineries, and the first vintage was 1990 – most of which he sold, save one barrel.  Today there are 24 planted acres on south-facing slopes that are sustainably farmed using many organic and biodynamic techniques.  The team planted another 9-acre vineyard called The North Terrace in 2000.  The vines are a blend of ungrafted, older UC Davis clones (Pommard and Wädenswil) and more recent grafted clones from Burgundy.  Fermentation is done with wild yeast, and the wine is run into French oak casks for 10 to 12 months and racked only once before bottling.  Maisons et Domaines Henriot (owner of Burgundian domaines Bouchard Père et Fils and Domaine William Fèvre) purchased the winery in 2017, but Mike Etzel has remained in place as president, and his son, also named Mike Etzel, stayed on as winemaker.

Beaux Frères has a marvelous result in their top wine for 2017, which is elegant and fresh.  The ripe cherry and plum fruit, Asian spices, and pretty floral notes are enchanting on the nose.  The extraction of the fruit here is very well-managed: the wine has density and a firmly silky tannic structure, but there is no heaviness or astringency, and everything stays in balance through the lingering finish.  95 points $94.00.

Check back for Part II of our conversation with Charles for more information about wine production in the Oregon region, and tune in next week to Wine O’Clock Live with our founder Greg Lambrecht on Tuesdays and Thursdays at 4pm ET on Instagram Live!