Whether cooking for yourself or a partner, on Valentine’s Day one wants to splurge. But going out to eat is an exercise in frustration as restaurants inflate their prices and create “special” menus to justify doing so. Why not buy top quality meat from your local butcher and pan sear it at home? It’ll cost a fraction of the price, it’s easy to do, and you can serve an extraordinary bottle of wine alongside the steak without the painful price mark-up. Your $200 bottle of wine at home would be $600 at a steakhouse. That’s persuasive math.

There’s nothing more decadent for a holiday of the heart than a seared steak with a structured yet opulent Cabernet Sauvignon. For that hedonistic quality, one needs to look to Napa Valley rather than the Left Bank of Bordeaux.

Early in the day, get started on dessert. Fill a saucepan with an inch or two of water and heat to a low simmer. Add baking chocolate to a medium metal mixing bowl and set over the saucepan. Allow chocolate to melt until smooth. Remove mixing bowl from heat. Add egg yolks and whisk until smooth.

In a second metal mixing bowl, add egg whites and salt. Whip with an electric mixer until the whites form stiff peaks. Using a rubber spatula, gently fold 1/3 of the egg white mixture into the chocolate. Take care not to overmix, as you want to retain the air bubbles. Fold in the remaining egg whites just until incorporated.

Divide mousse between 4 ramekins. Cover and chill until set, about 3-4 hours. Serve with whipped cream.

Bring steaks to room temperature. Season meat liberally with kosher salt and cracked black pepper. Heat a heavy-bottomed skillet, preferably cast iron, on high for several minutes and open your windows or your vent. Once pan is searing hot, add steak. Don’t move it around. Cook for 3 minutes until browned, flip and cook another 3 minutes. Check internal temperature with an instant read thermometer: 120 to 125°F for medium-rare or 130°F for medium. Once desired temperature is reached, turn heat to medium-low and add butter and garlic to pan. As butter melts, baste steak by flipping it in pooled liquid a few times or spooning over top. Remove steaks from pan and let rest ten minutes. Serve steak with remaining butter from pan drizzled over top. 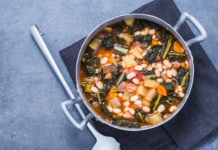