You might have used or encountered the terms “Old World” and “New World” when talking about wines, at several occasions before.  But what do those actually mean?

The most basic difference between New World and Old World wines is purely geographic. The term “Old World” generally refers to wines produced in countries considered the birthplaces of wine – basically Europe and Middle East. These include, for example, France, Italy, Spain, Portugal, Germany, Armenia, Greece, Romania and Georgia. New World wines come from countries that only started producing wine during and following the age of exploration or colonization. For instance, the United States, New Zealand, Argentina, Chile, Australia, China and Canada are New World wine regions.

Is there a difference in taste?

Old World wines generally taste different than New World wines. This is mostly due to differences in winemaking practices, philosophy and style. Old World wines are often described as being lighter-bodied, with lower levels of alcohol, higher acidity and tannins, and a more pronounced minerality and earth to them. New World wines tend to be riper, richer, and more fruit-centered, with less acidity and higher alcohol. Of course, these common descriptors are only gross generalizations, and there are plenty of exceptions to the rule. Let’s not forget that winemakers have quite a fair amount of control when it comes the wine style.

So which is better?

Neither! Both styles have wonderful things to offer. Although the current trend seems to be favoring Old World wines, wine drinkers loving the heritage and tradition that these wines represent; trends do change quite often, and New World wines might be back in vogue in the next few years. What’s important to remember is that what truly matters is what you personally like – so drink what you enjoy. Cheers!

Check out this map, courtesy of VinePair, for a visual understanding of the different Old World/New World regions: 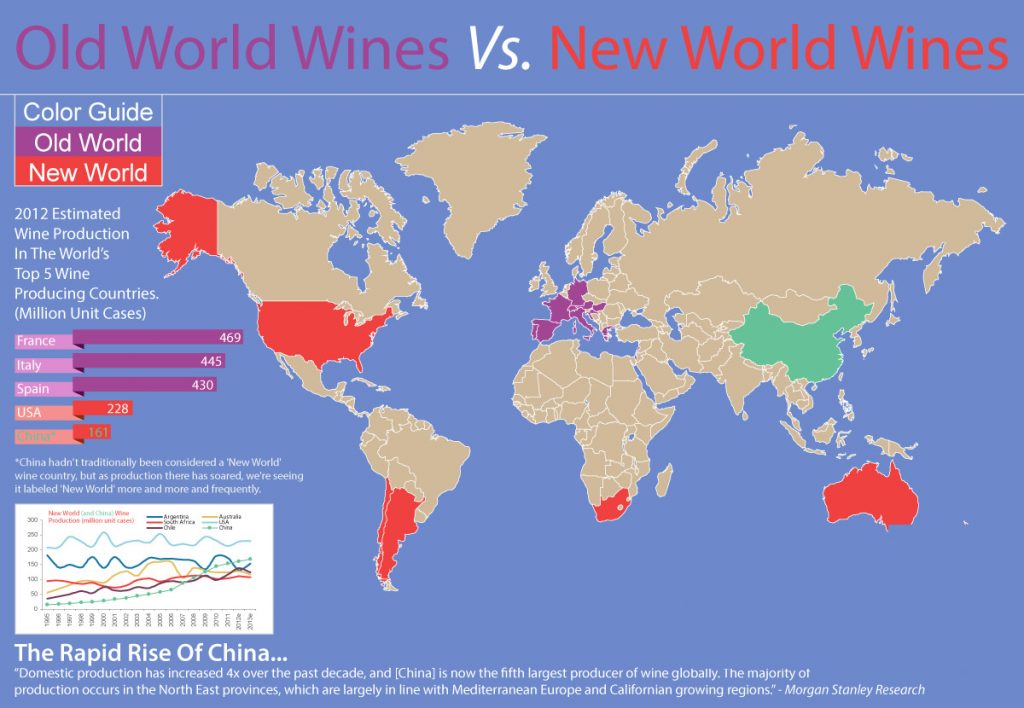