Wine Folly’s Madeline Puckette recently published an interesting article called “What Really Happened During Prohibition.” It illustrated what was going on during that time, how people lived, and how they managed to drink alcohol. Some of the history may surprise you!

Prohibition describes the time from 1920 to 1933 when it was illegal to sell, transport and manufacture wine but the consumption of wine was allowed.

The reason for the so called “Noble Experiment” was that the government thought it would fix lots of problems like alcoholism, child labor, poverty and anti-immigrant views including hatred towards the new immigrant population and their alcoholic customs.

The first question that comes to a true wine lovers mind… “How could people live without wine?”

Actually, they could not.

People stocked up and since wineries needed to sell off their inventory before the law went into effect, over 141 million bottles of wine were sold within 3 months. There were a few loopholes in law that still allowed people to consume wine, so people began to make their own wine at home by using “wine bricks”, boxes of compacted rigorous grapes that grape growers sold.

Many wineries shut their door but others did not – there was a lot of opportunity to sell wine illegally so few wineries kept a small amount of acres to produce wine.

At first people supported Prohibition but quickly realized that it would not fix the problems they thought it would do. The stock market crash and Great Depression caused the need to legalize the alcohol business for economic reasons. Prohibition was repealed in 1933.

After that, commercial wineries were the first to fill the demand for wine and quality was sacrificed. It took nearly 30 years for wineries to improve the quality of the wine being produced.

Check out the whole article to get a more detailed view on Prohibition.

4 Wineries That Give Back During Breast Cancer Awareness Month 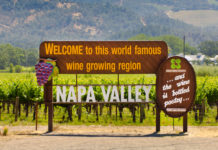 Wine-a-get away? Here are the top 5 Wineries to Escape to...